We graded the 2020 Democratic candidates on four key environmental areas. 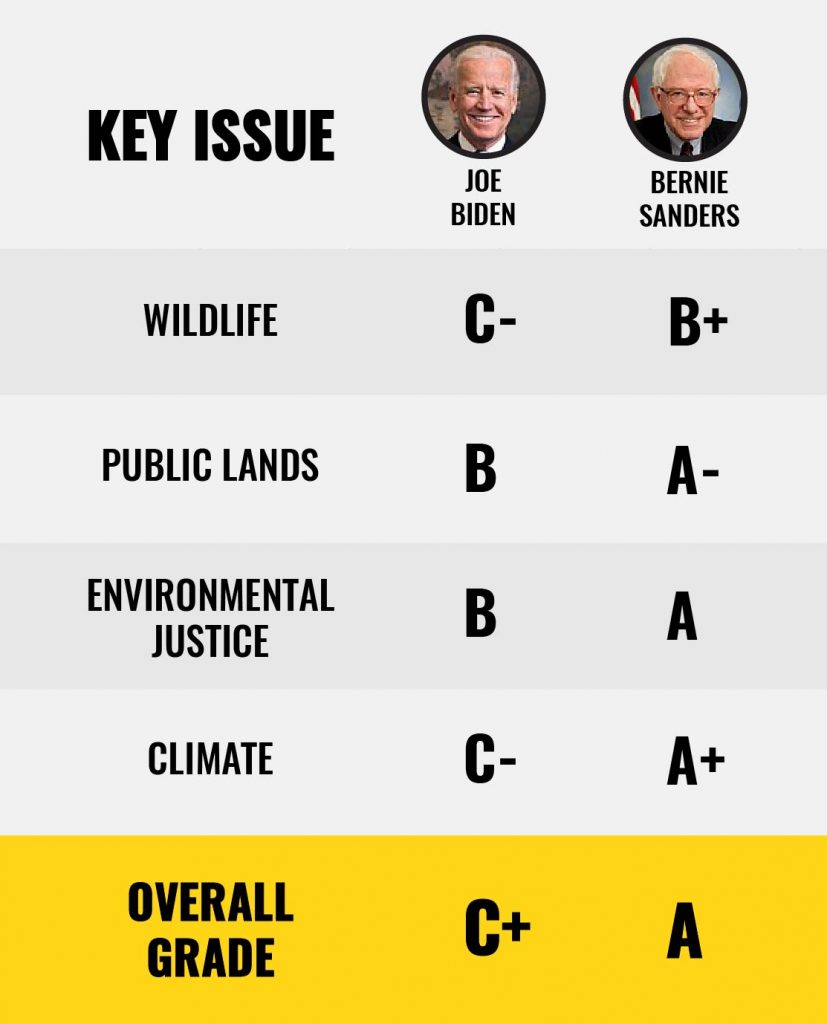 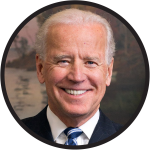 As the candidate with the longest political career, Vice President Biden’s environmental track record is a mixed bag. Biden continues to rely heavily on the Obama administration’s accomplishments as justification for his candidacy, but this means he must also take responsibility for the Obama administration’s shortcomings, including the BP Deepwater Horizon catastrophe, the failure to set protective ozone-pollution standards in 2011 to protect human health, and rolling back protections for endangered species across the board. Biden’s climate plan fails to address phasing out leasing of fossil fuels on public lands and fails to set ambitious goals for drastically reducing greenhouse gas pollution by 2030.

Wildlife (Grade: C-) – Senator Biden failed to support the 1993 Amendments to the Endangered Species Act, which would have significantly strengthened the law and put more imperiled species on the path toward recovery.1 As vice president, Biden targeted the recovery program for the desert tortoise, wrongly characterizing it as government waste.2 As part of the Obama administration, he supported an executive order weakening protections for the northern spotted owl and finalized a set of regulations that weakened implementation of the Endangered Species Act, undermining the conservation of all endangered species nationwide. Biden’s website contains no information regarding the protection of endangered species or the extinction crisis, signaling it would not be a priority for his administration.

Public Lands (Grade: B) – As a senator, Biden generally took positions that supported public lands. Unfortunately, he also voted for both the Real ID Act and the Secure Fence Act, which has allowed the Department of Homeland Security to waive virtually all environmental laws in its rush to construct the border wall. While he was Vice President, the Obama Administration established several significant national monuments and marine reserves. However, these gains were undermined by other policy changes, including weakening the regulatory safeguards on all national forests, allowing offshore fossil fuel leasing in Alaska, and failing to curb oil and gas development on public lands. Biden does not address the management of public lands or fixing the damage caused by the southern border wall on his campaign website.

Environmental Justice (Grade: B) – Biden released a general clean energy and environmental justice plan to “stand up to the abuse of power by polluters who disproportionately harm communities of color and low-income communities.” Biden broadly promises to (1) reinstate federal protections rolled back by the Trump administration that were designed to protect communities; (2) engage in community-driven approaches to develop solutions for environmental injustices affecting communities of color, low-income communities and indigenous communities; (3) hold polluters accountable; (4) ensure access to safe drinking water for all communities; and (5) ensure communities harmed by climate change receive preference in competitive grant programs under his plan. However, the plan lacks specificity about executing these goals, including actions directing federal agencies to actively mitigate ongoing public health and other harms linked to fossil fuel extraction and other dirty energy industries. The plan also fails to speak to empowering frontline communities in a clean and democratic energy transition. He was noticeably absent from the first-ever Presidential Forum on Environmental Justice held in November 2019.

Climate (Grade: C-) – As a senator Biden failed to support stricter vehicle-emissions standards in 1990,3 1999,4 20035 and 2005.6 He also voted against legislation in 2002 that would have strengthened renewable energy initiatives.7 During the Obama administration, some progress was made in curbing the extraction of coal from public lands, regulating methane emissions, and establishing the Clean Power Plan. However, these gains were more than offset by the administration’s promotion of oil and gas extraction and its embrace of fracking. Biden does not support the Green New Deal and appears to support only some aspects of a just transition away from fossil fuels. Biden would not declare that the climate crisis is a national emergency. While his climate plan would end new fossil fuel leasing on public lands, it is silent on phasing out production from existing leases. Biden would not ban fracking or end fossil fuel exports. While his plan promises to end fossil fuel subsidies, he stops short of committing to a complete ban on new fossil fuel infrastructure. Biden’s climate policy positions do not track the scientific recommendations of the Intergovernmental Panel on Climate Change (IPCC) and only set a “net zero” emission target at 2050, without any interim goals for achieving 100% carbon-free electricity or requiring 100% zero-emission vehicles by 2030. 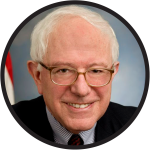 Wildlife = B+
Public Lands = A-
Environmental Justice = A
Climate = A+

Senator Sanders has demonstrated a strong environmental record throughout his career, including having proposed the strongest plan to address climate change and being an original cosponsor of the Green New Deal. He has also voted in Congress, over the years, to protect wildlife and public lands, and has consistently opposed legislation that exempted the border wall from complying with U.S. environmental laws.

Wildlife (Grade: B+) – As a congressman Sanders was an original cosponsor of the 1993 Amendments to the Endangered Species Act, which would have significantly strengthened the law.8 Sanders has been a strong supporter of protecting wildlife over the years, and has cosponsored legislation that would overturn the Trump administration’s rollback of endangered species protections. However, his campaign platform does not contain any significant information or plans to address endangered species or the extinction crisis.

Public Lands (Grade: A-) – Sanders has proposed resurrecting the Civilian Conservation Corps by investing $171 billion for build green infrastructure, restoring wetlands and corals, mitigating flooding and soil erosion, and planting trees. He proposes $900 million to fully and permanently fund the Land and Water Conservation Fund to protect lands. He would also end the National Park System’s maintenance backlog by addressing the $25 billion in repairs and maintenance that the park system urgently needs.9 With many candidates opposed to Trump’s border wall, Sanders is the only candidate that voted no on the REAL ID Act of 2005 and the Secure Fence Act of 2006.10

Environmental Justice (Grade: A) – Sanders’ robust environmental justice platform falls under the umbrella of the Green New Deal.11 Sanders commits to environmental justice principles, stating that “the goals and outcomes of the Green New Deal should continue to be developed under the Jemez Principles for Democratic Organizing with strong and consistent consultation with the communities most affected by the currently unequal enforcement of environmental laws.” Grants awarded as part of the plan would prioritize communities, including Indigenous communities, most impacted by fossil fuel extraction, transportation, and climate change and encourage energy democracy. As president Sanders would direct the EPA to fully investigate environmental justice violations claims and fully remediate all superfund sites. In 2019 he introduced the WATER Act as part of the Green New Deal, a bill that would dedicate nearly $35 billion for various water systems for rural or low-income communities with the goal of preventing water contamination disasters that have occurred in towns like Flint, Michigan, and are a growing threat in places like rural Iowa. Prior to Sanders’s 2020 presidential run, he vehemently opposed the Dakota Access Pipeline and asked President Obama to stop construction.12

Climate (Grade: A+) – Senator Sanders uses the “Green New Deal” as the gold standard for addressing climate change.13 Sanders would declare that the climate crisis is a national emergency and would use the full powers of the office of the president to confront the climate crisis. Sanders’s plan calls for reaching 100% carbon-free electricity — that is publicly owned and not-for-profit — and 100% emissions-free vehicles on or before 2030. Sanders has set the proper goal of complete decarbonization on or before 2050. His plan also includes energy efficiency and supporting sustainable local agriculture, while not relying on nuclear, geoengineering, carbon capture or sequestration, or trash incinerators. It also calls for creating a $40 billion Climate Justice Resiliency Fund to provide frontline communities with jobs, resilient infrastructure, and economic development. Sanders would end all federal fossil fuel leasing on public lands and waters and phase out all existing production of fossil fuels. Sanders would prosecute polluters that are responsible for causing the climate crisis and ensure a just transition to a decarbonized economy. At the international level, Sanders pledge $200 billion to the Green Climate Fund and rejoin the Paris Agreement. Sanders’s climate plan would be funded in part through taxing the fossil fuel industry and wealthy and larger corporations.

If a candidate has held previous political office, the votes and legislative initiatives of that candidate were assessed. For candidates who have not held a previous office, the campaign policy platforms were reviewed, as were statements made by the candidate in various speeches and debates. A questionnaire was sent to all the candidates as well and when the questionnaire was returned, the answers provided were also considered.

The four areas were weighted equally in determining an overall environmental grade. Below is a list of key questions we evaluated for each candidate: